Why Learn Python? Why it’s so HOT right now!!

“Python fun facts”: In Python the most used APIs and important libraries available for Machine learning, AI and Data Science.

We might have thought how a programming language which has been created in a person's holiday time has been a huge hit, If you are the one then here you go the below benefits of Python programming points will clearly shows why it is, Here you go:

"Python Fun Facts": Python is the important part of Google, the dozens of Google engineers use python in every day

Top field where Python Is Used?

As already shared above Python language is considered as a common purpose language to be used in different fields even including the top technologies. Listing few below for your reference

This COVID 19 pandemic period has put the whole world in an unstable situation, the current report shares even during this pandemic situation the job opportunities of Python developer still in demand.

As already updated the Python programming language suits for both beginners and experienced professionals hence the job opportunities are also available for both freshers and developers as well. 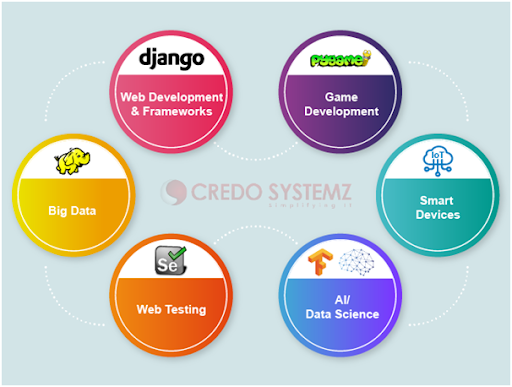 Here You Go: As a beginner or fresher IT professional are you thinking about starting you career in Python and asking yourself Why learn Python ?, Then here you go this part is specially for you.

Learn Python and Certified – Get Your Certification

As a matter of Fact: Python has highly paid and also huge Scope of Jobs and Career Growth

Besides all, Python is very easy to learn and as we discussed it having high career growth and high demand for python developers. Python is the excellent starting point to learn in 2021. Programming is an art, here python proved this from all the above points.Interested to learn Python? Click below to start Python also checkout our Python Course Syllabus for your Python real time training.